Founded in 1823, Lascaray S.A. is one of the oldest companies in Spain, and the one with a longer trajectory in our region, Alava. Throughout its almost 200 years of life, the company has diversified its activities, adapting itself to new technological requirements and moving with the times in order to respond to changing tendencies in different markets.

The beginning of it all takes us back to 1823, when Juan Bernardo Lascaray arrives to Vitoria from Ciboure (France) and rents a small factory in order to start the manufacturing of tallow candles.

Casimiro Lascaray, the second generation of the family, starts up in 1855 a new factory, under the name of “La Estrella Alavesa” (The Star from Alava) –LEA– , and starts manufacturing stearic based candles and oleic soap. The company sets a foot in the sector of “soaps and detergents”, beginning to product a soap called “Marfil”.

In 1885, a Félix Lascaray succeeds his father in the company management and consolidates the industrial project. 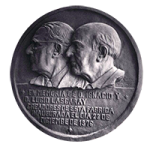 In 1905, the factory is burnt to ashes in a devastating fire, ruining the effort of decades in one night. However, in two year time (1907), a new factory is built up where the former was, extending its capacities and pioneering in the use of new chemical techniques imported from Germany. Back to those times, Lascaray present configuration is already profiled, splitting the company in two: Fatty Acids distillation and soap manufacturing.

In the early 20’s, and led by the fourth generation of the family Lascaray, new processes and procedures helped Lascaray, under the brand Products LEA, to extend its activity, beginning with the manufacture of shaving products, to become in very few years, the Spanish reference for shaving creams and soaps.

Between 1973 and 1975, our facilities are moved to a new location in the suburbs of Vitoria, the industrial area where the current Headquarters of the Lascaray Group remain.

Recently, in the 90’s and under the management of the fifth generation of the family, Productos LEA develops and manufactures a wide range of Cosmetics and Personal Hygiene products, expanding its portfolio to  products for Men, Women and Children.

Nowadays, Lascaray S.A. is still lead by the sixth generation of the family that began the business, keeping its two main business units. The Cosmetic Division, Productos LEA, has become a reference in the sector of Classic and Modern shaving in the Spanish and European markets and, at the same time, has significantly increased  its market share in the Personal Hygiene and Cosmetic business.

In its commitment to continuous improvement and innovation, in 2016 began the comprehensive renovation of cosmetic facilities for their adaptation to differentiated white rooms according to their classification for the production, control and packaging of cosmetic products, and with controlled environments, according to requirements of ISO-14644.

These new facilities, with an area of ​​2,000 m2, place LEA products in an unbeatable position to work more efficiently and innovatively, guaranteeing quality standards and satisfying the needs of customers.